So far I have been doing more eating than cooking around here. I’ve eaten my way through aubergines and chickpeas nearly all around the country, from the Cedars forest in Bcharre, 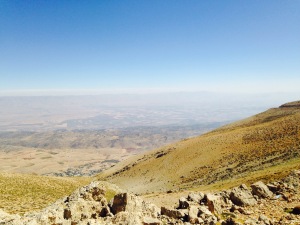 View of the Bekaa

east to the Bekaa Valley, down to the evergreen Chouf and back to Beirut again. All of this courtesy of my ‘internship’. Delicious as the food is – and I haven’t seen the end of its deliciousness- if I carry on like this the only thing getting interned will be the endless
supply of endless varieties of kebbeh in my stomach. So I was happy to read this handy hint for portion control during a Lebanese lunch:
‘Keep your plate full at all times in order to avoid infinite refills’

My cooking to date has basically involved two days ‘shadowing’ chefs, and the aforementioned chopping vegetables into tiny pieces. I borrow this term from my previous job where shadowing is actually meant to be a positive, structured, thing. But at my weaker moments it feels more like being some kind of unwelcome ghost (i.e. most kinds of ghosts) hovering around, trying to peer over people’s shoulders into pots and pans and somehow decipher the holy grail of ingredients contained within. My ghosty skills need more practice though, as today I knocked over a packet of bulghur and spilt it everywhere as I tried to silently delve into the spice cupboard.

Since I expect that internships are meant to be a two-way thing, I was getting worried that there could be no such thing as 10 free lunches, let alone one. So I was happy –for those friends who know my emotional inhibitions well let’s say around a 9 on a scale of 1-10, which equates to practically overjoyed – when it was suggested to me that I should join in the kitchen training for the set up of the organisation’s latest restaurant, and I could help by noting the portions of each ingredient used (Yes! Like basically writing down the recipes to keep locked up in a treasure chest forever!) and the end of day tasting and evaluation of the food that was prepared (Like, hello!!! Picture the food critics on Masterchef coming in to do their pretentious posturing over people’s carefully crafted dishes…well, perhaps not quite so pretentious). Thus today was my first day with a proper task that did not involve eating, and well, I failed on all fronts, due to the fact that (a)I did not have the raw materials and (b) I can’t really speak Arabic. But of course I blamed it on (c) that I am an abject failure on all fronts.

The whole experience is a bit like an emotional pendulum at the moment. From delighting in the lack of structure and obligation to feeling lost and without value because I have no job description, and no paycheck coming in telling me what that value is. From enjoying the privileged position on the sidelines afforded me by my lack of language skills, to despairing that I may actually have become invisible (though not enough to be able to knock over a packet of bulghur without people noticing). But it is all part of the process I suppose. Summits and valleys… 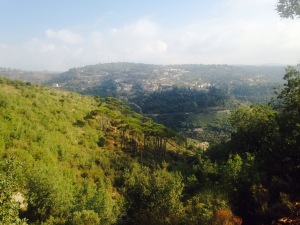 Yalla! I must go, and hope tomorrow I can put some of my indescribable skills to use.

My third day in the city and I already feel swept up in a forcefield of sorts. I landed softly, thanks to a warm welcome from some lovely half-Lebanese friends in their  mountainside village overlooking Beirut, peppered with Virgin Mary shrines and neon crosses to mark its identity. The next day’s drive into the city was a fascinating whistle-stop tour of landmarks -including the largely Shia southern suburbs, the road marking the civil war Green Line, many buildings pockmarked with bullet-holes- and related recent political history. A too-late night in the up and coming hipster area near my new home made the following day – and the first day in my new ‘job’– feel quite surreal and full of panicky self-doubt about the string of decisions that brought me here.

But, today, on the third day, fittingly, the dream was stoked back to life. I was put to work in the kitchen straight away. I chopped tomatoes! I chopped radishes! I chopped cucumber! Never before have I been so happy to chop vegetables. I was even told my tomatoes for Tabbouleh were *amazing*. That was the actual word used. In the reserved northern lands from where I came I doubt I would have received such unbridled praise for the middling achievement that this was. I hope to earn enough trust to be allowed near the onions, parsley and mint soon.

Disappointingly, I did not learn The Right Way to hold a knife when chopping. When I asked the chef, he shrugged and said ‘any way’. I suppose some things you have to learn as you go. But I did learn that you should not try and chop more than three slices of tomato into small cubes together at the same time; any more and you lose control of the tomatoes. I also confirmed that – no surprises here – a sharp knife makes all the difference. But most of all that, like in development work, context means everything. You can have some fancy skills and top class equipment, but only if these meet with the right kind of tomato can you achieve a successful Tabbouleh chop.

Today I also met Susanne, one of the daily rotating chefs of the restaurant, hailing from a village in the north of Lebanon. She was the author and perfecter of one of the many feasts the restaurant offers, including a delicious chicken and rice stew, a beautiful cake layered with all colours of vegetables in oil, and a –jury’s still out on this one-raw lamb/goat’s meat pie (some language barriers prevented identifying the exact meat involved). She was joined by her husband and he was getting properly hands on in all the food preparation: pounding the raw meat, slicing carrots, and laying everything out for the eating. Respect. The fact that he looked a bit like my late granddad made me warm to him all the more.

Much of this delicious feast took two day’s home preparation. It is true slow housewives’ (no offence to dutiful and committed husbands) cooking. None of the flashy kitchen entourage of sous and commis chefs. Just one Master Chef: the Lebanese mama.

Despite some language barriers – somewhat of a first for me and quite frustrating- I still managed to have my rakweh coffee grounds read by this Lebanese Master Chef after her day’s work was nearly over. Awkwardly, only one thing she said had me nodding (I think I was supposed to get a little bit more involved in the theatre of it, but my inability to lie got in the way). Still, after a final thumb print in the coffee I was a happy customer: she promised me success in the two things –greedy me- I had concentrated my thoughts on…Time will tell…