Ah, the mighty pomegranate. Such a beautiful and seductive fruit; its leathery red skin and multitude of succulent ruby seeds bearing age-old myths and evoking ancient longings. According to Joudie Kalla, who I am cooking along with during her three-week Guardian residency, across the Middle East the pomegranate (remmen or rumman, in Arabic) is a symbol of abundance and prosperity. So too – perhaps due to common climates and past empires- in Greece, from where my mother hails. Although my mother is not someone you would call conventional, she displays the odd bout of radical fervour. The New Year after my beloved grandmother died, she took it upon herself to enact the Greek tradition of breaking a pomegranate on the front doorstep, to usher in good fortune for the year. The fruit lay there, dismembered and oozing its red syrup, looking a bit like road kill. I can’t tell you if that year was a particularly fortuitous one.

Pomegranate molasses is another Middle Eastern delight that I was first introduced to through aforementioned cookbook Jerusalem. In a recent Channel 4 Desert Island Discs interview, co-author Ottolenghi willingly accepted responsibility for engendering pomegranate-molasses-neurosis (my paraphrase) amongst exotic-food-obsessed middle class Britons. Before going any further, I would like to issue a warning: if you are going to make this recipe, and you are not already in the category of exotic-food-obsessed neurotic, ensure you buy all-natural pomegranate molasses with no added nothing. I learnt my lesson after causing a mini-crisis when cooking a Lebanese meal with some friends before embarking upon my sabbatical adventure. One co-cook, who had spent years in Lebanon, curled his face up in pure disgust at the pomegranate molasses I had bought, which smelt sweet and sugary and nothing like the wonderful burst of sourness you should get from a good pomegranate molasses. 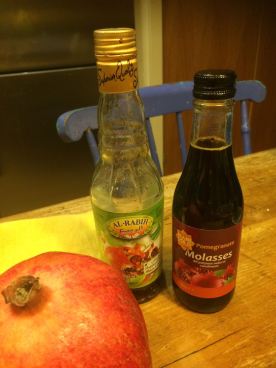 While Lebanese food abounds in pomegranate molasses, I must admit I didn’t come across the ingredient that much when in Palestine, and had never heard of the dish Rummaniyeh before reading Joudie’s recipe. I was interested to learn from her article that it is more common to coastal areas: namely Yaffa, the largest city in historic Palestine -and now within the borders of present-day Israel-, and Gaza, to where a large part of Yaffa’s inhabitants were displaced during the 1948-49 war. Due to the mounting difficulties moving from one part of the Palestinian territories to another, Palestinian cuisines are now becoming even more fragmented and localized. Even though I am familiar with these difficulties, I was still struck by yet another way in which national culture is being destroyed.

Well, how to move on, except to say that despite this being my first encounter this dish, it was, like the Za’atar buns, a total joy to make and to eat. I particularly enjoyed trying out a new way to de-seed a pomegranate, after watching Joudie’s insta-video. This involved cutting the fruit in half, massaging and then beating it with a wooden spoon. Very 50 Shades. There were still bits of pulp in there but it was more fun and less messy than the turning inside-out method.

The best thing(s) about this dish: simple, cheap and delicious. Even the aubergine, my ancient nemesis, cooked properly, if in a slightly longer time than in the recipe (but probably because I added a bit more than specified). It added a lovely texture to the dish.

I enjoyed it with Greek yoghurt, Arab bread, Basmati rice, a mulatto salad and Anglo-Scottish/South African friends talking about broken hearts and Christian attitudes to sex. The pomegranate had its way, obviously. 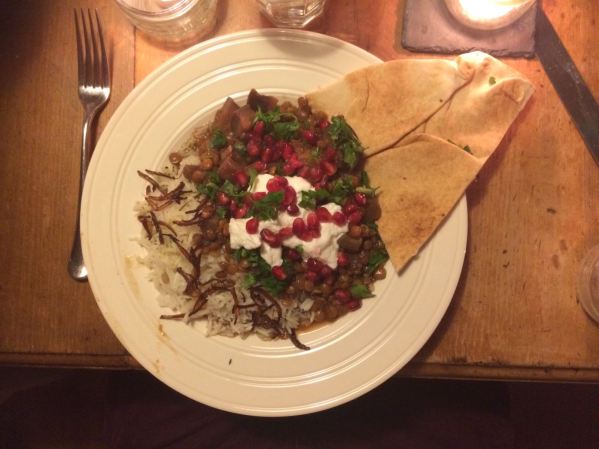 Taboon bread or khubez, to serve

1 Put the lentils, cumin and water in a saucepan, bring to the boil and then continue to boil for 10 minutes. Add the aubergine and salt, then leave to simmer for 25 minutes.

2 Set another pan over a medium heat. Add the olive oil and garlic and cook for a few minutes until they turn golden.

3 When the lentils and aubergine have been cooking for their 25 minutes, add the fried garlic and pomegranate molasses, and stir. Cook for another 5 minutes, then mix in the lemon juice and, if you like, add the optional tbsp of flour to thicken the dish (omit this for a gluten-free version).

4 Place in a serving bowl, drizzle with a little olive oil, scatter the pomegranate seeds over the top and finish with some parsley. Enjoy with hot taboon bread or khubez.