I remember a story from my childhood – told to me by my grandmother, perhaps –about Jesus sitting under a palm tree, maybe in Jericho, and tasting his first date. Surprised by its delicious, sweet taste, he uttered an ‘o’; and this is the reason for the small ‘o’ you can see on the stones of dates. I always loved that story, imagining Jesus stopping and taking shelter from the hot sun, and sinking his teeth into a date.

While many aspects of the Messiah’s life on earth are disputed, this story is perfectly plausible, in my opinion. There is something both regal and other-worldly about the sweetness and soft texture of dates; my foodie flatmate, who waxes wonderfully lyrical about tastes and textures, calls them the food of the gods, and is sure there’ll be bowls upon bowls of them in heaven.

In modern-day Palestine (i.e. the areas of Gaza, the West Bank, and East Jerusalem, all now under Israeli control), dates are commonplace in street stalls. They even sell yellow, fresh dates (more likely to be the ones Jesus ate), though I wasn’t there at the right time to try them. Despite their relative abundance, they are still a delicacy and used for celebrations: during Ramadan, soft biscuits called Ma’amoul are filled with sweet date paste.

Fresh dates on sale in Palestine

But not all dates in Palestine are sweet. Grandparents there tell grandchildren of the date, 100 years ago, when their future was signed away.  On 2 November 1917 the then British foreign secretary, Lord Balfour, wrote a history-altering letter to the representative of British Jews, looking favourably upon the creation of ‘a Jewish homeland’ in Palestine, which was at that time still under Ottoman control. It is seen as paving the way for the establishment of the state of Israel, and ‘marking the beginning of what is today widely considered the world’s most intractable conflict’.

The story is too long and complex to do it justice here, but as articulated in the excellent piece linked above, British motives were mixed, to say the least, promoting a Jewish homeland in Palestine with one hand while restricting Jewish immigration into Britain with the other. Once the British mandate for Palestine began in 1922, the stars aligned, so to speak. Despite Balfour’s letter including the caveat that the ‘civil and religious rights of existing non-Jewish communities in Palestine’ should not be prejudiced by the establishment of such a homeland, the native Christian and Muslim (and other) communities, representing 90% of the population of Palestine at that time, were never actively consulted.

Palestinians blame Britain for the their ‘Nakba’ or catastrophe in 1948, when Israel was established on more than half the area of British-mandated Palestine, and hundreds of thousands of Palestinians lost their lives or were forced to flee their homes, so far never to return. Israelis praise her for the same reason, and tonight are holding a (low-key) celebratory dinner, which PM Theresa May will attend.  In the interim, of course, the horrific events of the Holocaust rightly prompted compassion for the plight of the European Jews at that time. But it would seem, as Palestinians continue to point out, that it is the Palestinians themselves above all who have had to pay the price for the crimes of others. 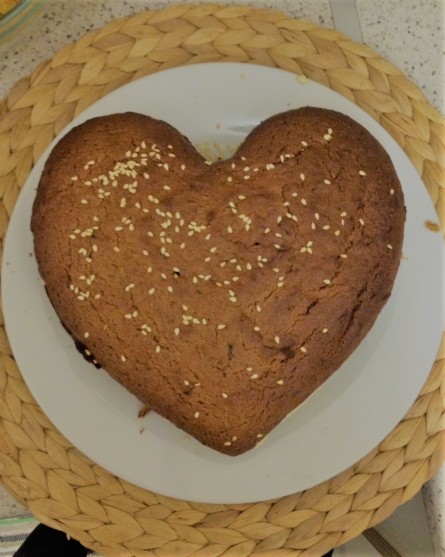 So, here we have a bittersweet story. Mostly bitter, admittedly, but sweet because the land both Palestinians and Israelis want to live freely and safely in holds so much beauty and promise.  The cake recipe that follows is, appropriately, a slightly adapted homage to the chef’s Palestinian grandmother in which the sweet dates win out over the undertones of bitter tahini. In between I added a tahini cream recipe from Israeli chefs, Honey and Co, which adds an extra twist. In art, if not in life, the two sides (bitter and sweet, Israeli and Palestinian) come together well.

*Depending on the softness of your dates, see step 3

**The softer the dates, typically the sweeter, so adjust your sugar to your liking. 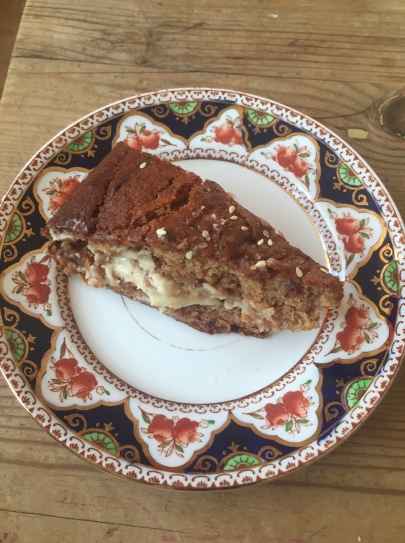 Place all the ingredients into the mixing bowl of a stand mixer and mix at very low speed. Alternately, whisk together by hand, being careful not to over-whisk (I whisked by hand). Filling should be smooth, creamy, and stiff enough to hold a shape (mine wasn’t, but it didn’t matter).

When cooled, cut the cake in two horizontally, and fill with tahini cream.

If, like me, you had dates and tahini cream left over, these make a perfectly delicious dessert together as they are.